The following graphs are based on snow depth charts for the Perisher Valley region, New South Wales Snowy Mountains for the years 1954 to 2012. Measurements are from Spencers Creek on the way to Charlottes Pass and were kindly provided by the Snowy Mountains Hydro-electric Authority (data now available online).


The Australian ski season goes from June to October but be aware that Australian snow falls are highly variable, as illustrated in the first graph. The good news is that, averaged over several years, the snow falls do not seem to be getting worse and a very good dump seems to occur every few years. Picking, in advance, which years are "good" seems impossible. However, just like going to the horse races, it pays to know the "odds" that a particular week of the year will be good - that's what this site is about - averaging the conditions over many years. The third graph gives these odds.

My Guide to Ski Conditions

As a rough guide, the ski resorts are conditions are:


This is my own rule of thumb - the resorts tend to not publicize the relationship between snow depth and ski conditions - no free trips in it for me :( .

Make a note of the snow depth when you go to the snow as some of your favourite runs might be better or worse than my guide.

BoM note: "Snow making facilities are used at the resorts to enhance snow depths and snow depth measurements may not represent snow conditions."  - judge for yourself!


Links (sorry if some no longer work )

The first graph is not  a 3D model of the Snowy Mountains! It shows the depth of snow (cm) by time of year over the period 1954-2012. The left axis is month, starting at the back with June and ending at the front with October. JU1 stands for the first week in June, JU3 stands for week in June. The right axis is year, starting with 1954 on the left and ending with 2012 on the right. 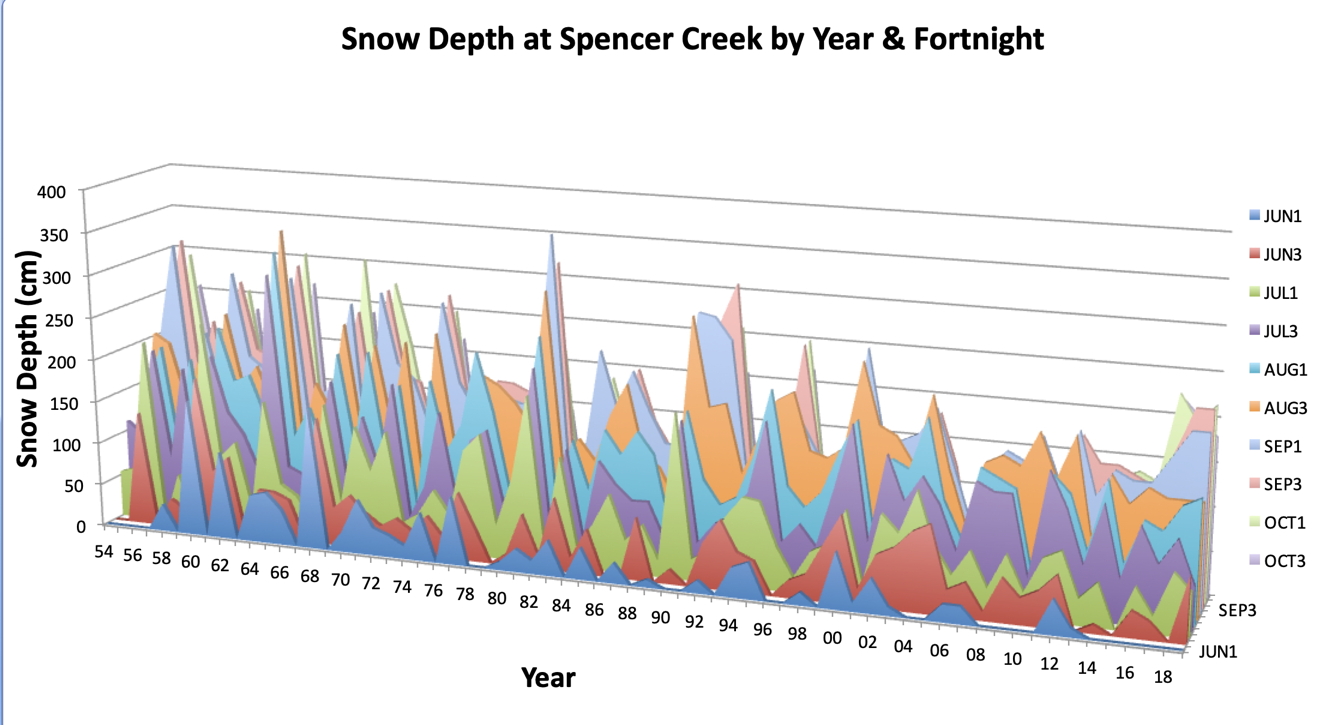 Snow depth for August and September by year

This graph shows the depth of snow in the middle of August & September respectively (3rd week), over the period 1954-2012. The year to year variations are very evident in this graph. They do not seem to be predictable! The linear trendline shows no noticeable change to the avarage depth during August over the decades. But the peaks seem to be getting lower! 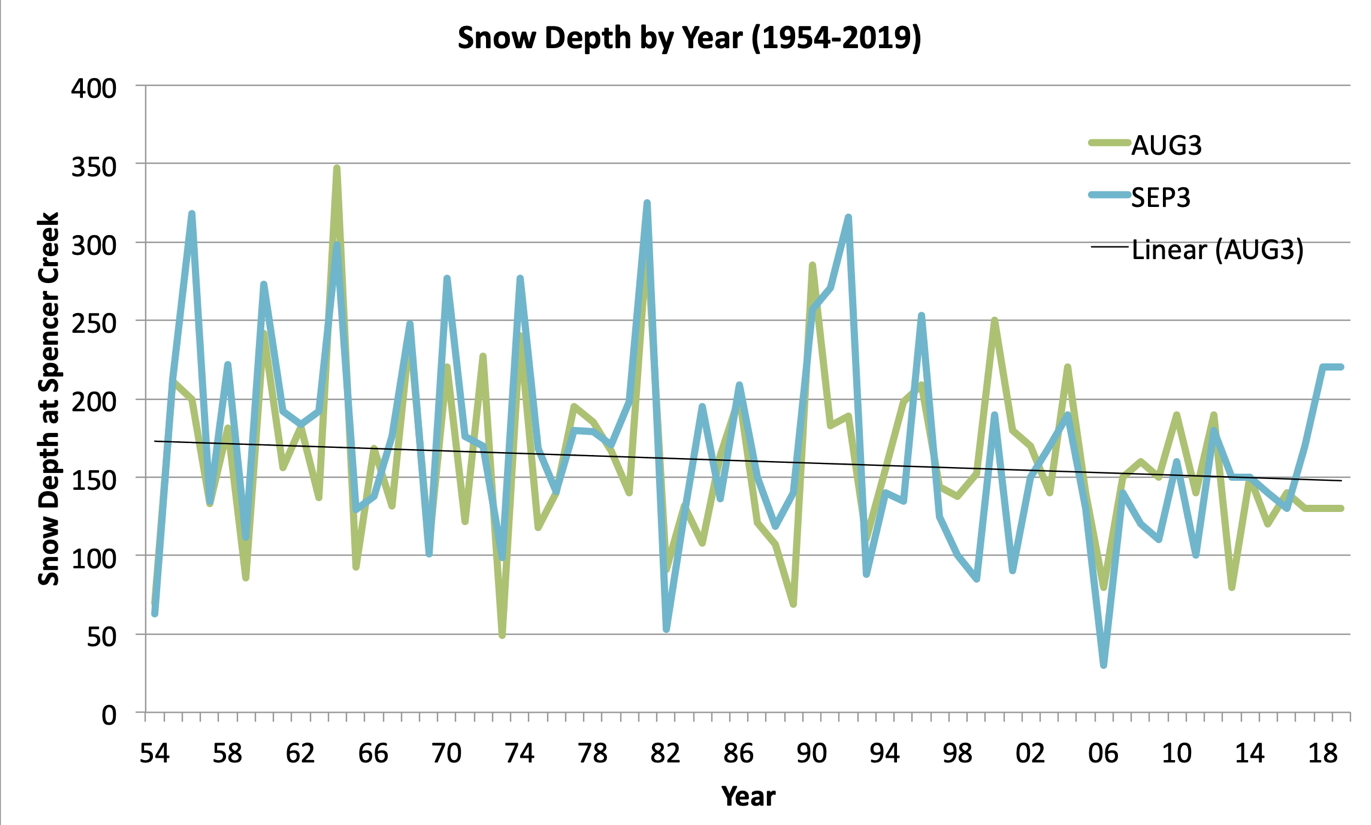 Probability of given snow depth by time of year

This graph shows the probability of certain depths of snow by time of year. For example, in the third week of August (AUG3) there is about a 55% chance of a snow depth exceeding 150 cm (green curve) and  a 87% chance of a snow depth exceeding 1 metre (red curve). These values are based on the number of years where the given snow depth is equalled or exceeded, out of the total of 59 years of data. So  if 20 years during this period equalled or exceeded a depth 100cm the probability is 20/59 = 34%. This does not take account of any change in trends in recent years. 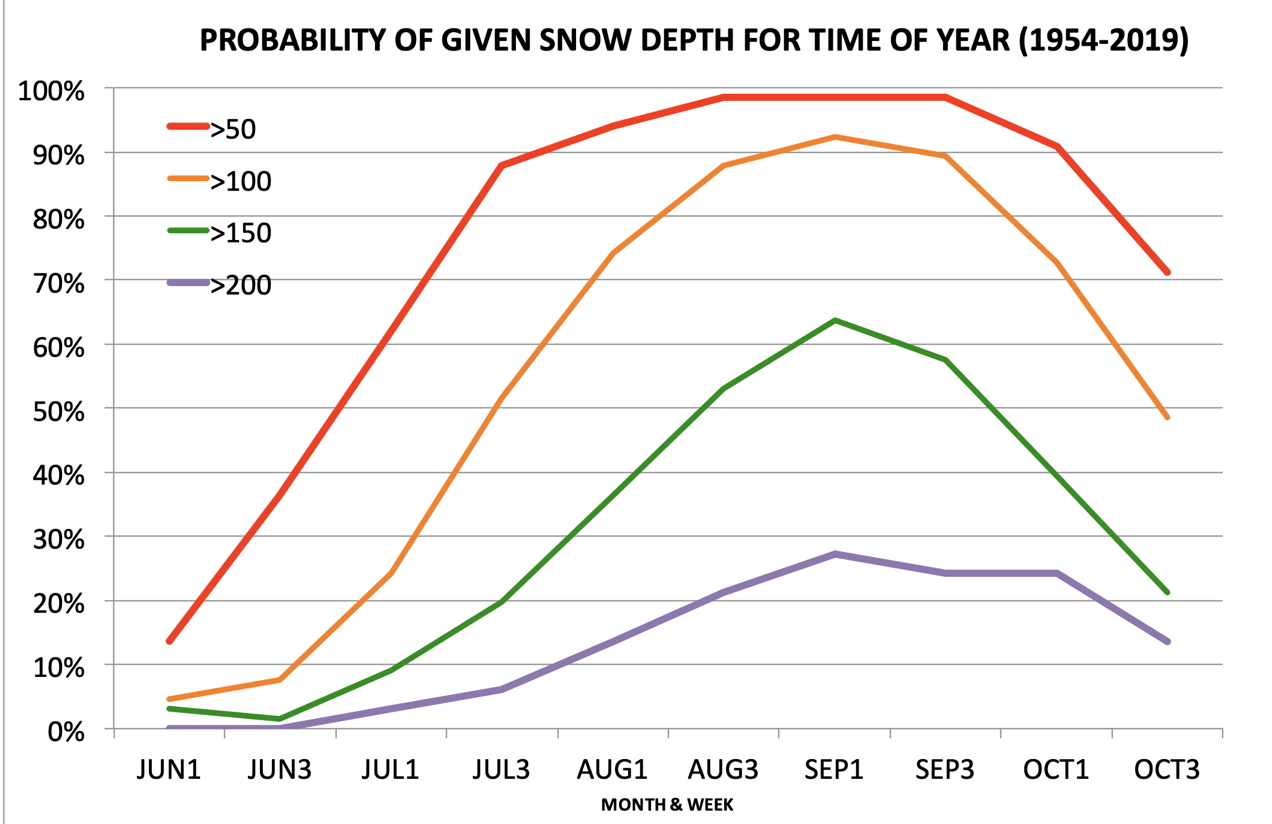 This is a new graph showing the probability of "good" snow (>150cm) in early September by decade. The trend line is not too reliable due to the large dip in the middle. Let's hope the recent "improvements" are sustained! 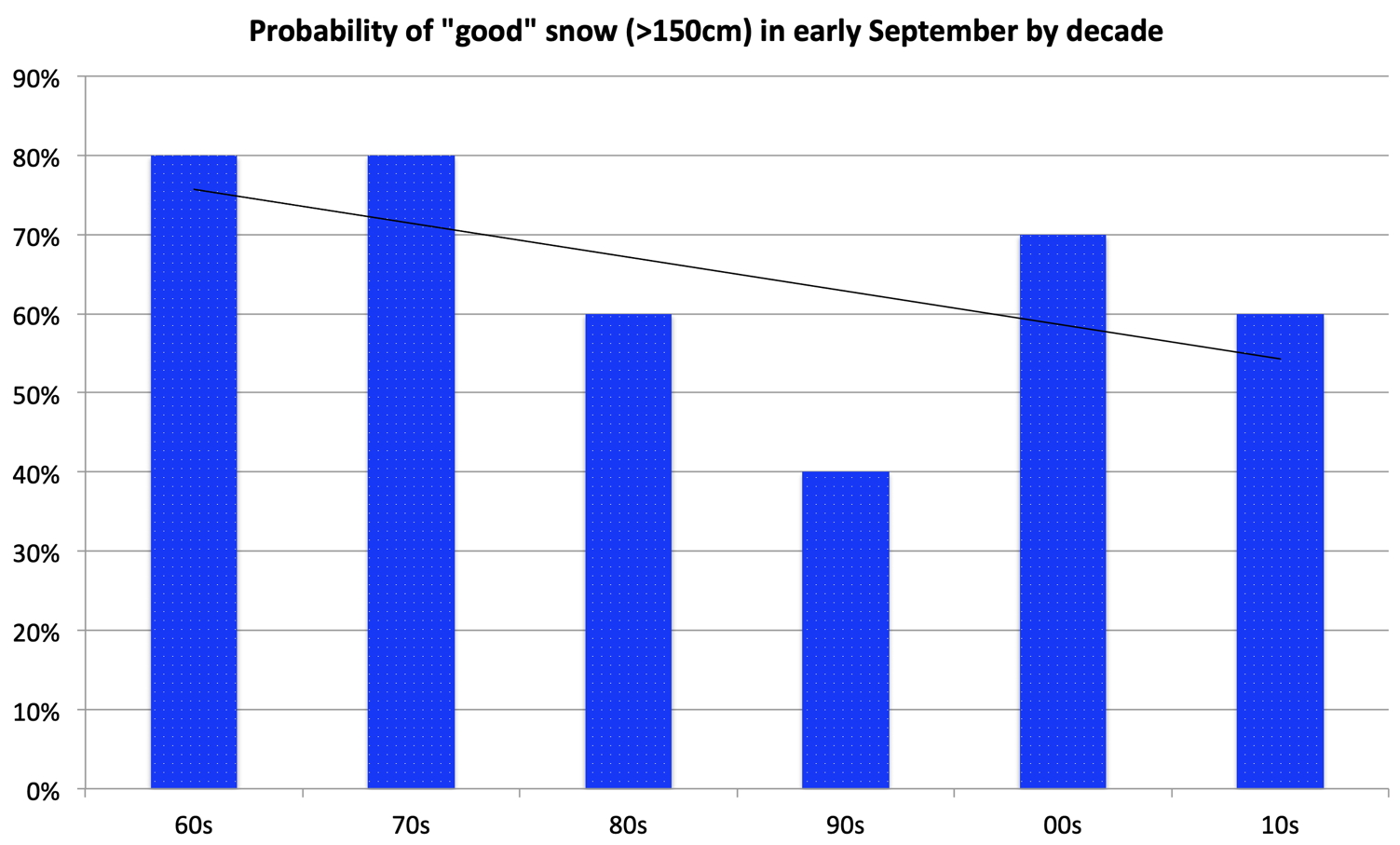 
Below are some snapshots of Mt Perisher in late May or early June over several years.

However, I have been spoilt by conditions in Hakuba, Japan (Jan 2015):

The Age 4 May 08: High hopes for bumper ski season

Update 2 Aug 06: BUT... with a snow depth of less than 0.6m at Spencers Creek at the start of August it is in the running the worst season since 1973. Update: sure was!

2 Jun 05: This year SE Australia experienced one of its warmest, driest autumns on record. Let's hope it doesn't continue through winter.

Post-season report: There were very good dumps in August and reasonable snow still falling early in October so don't let the pre-season photo put you off.

80cm in one dump in late May 2000! Good news for the start of a great season. The Sydney Olympics meant that the slopes were empty.  A great year!

The message seems to be if the snow is good - get down there before it goes!
Rough guide only

Finally, don't blame me if the snow is no good!